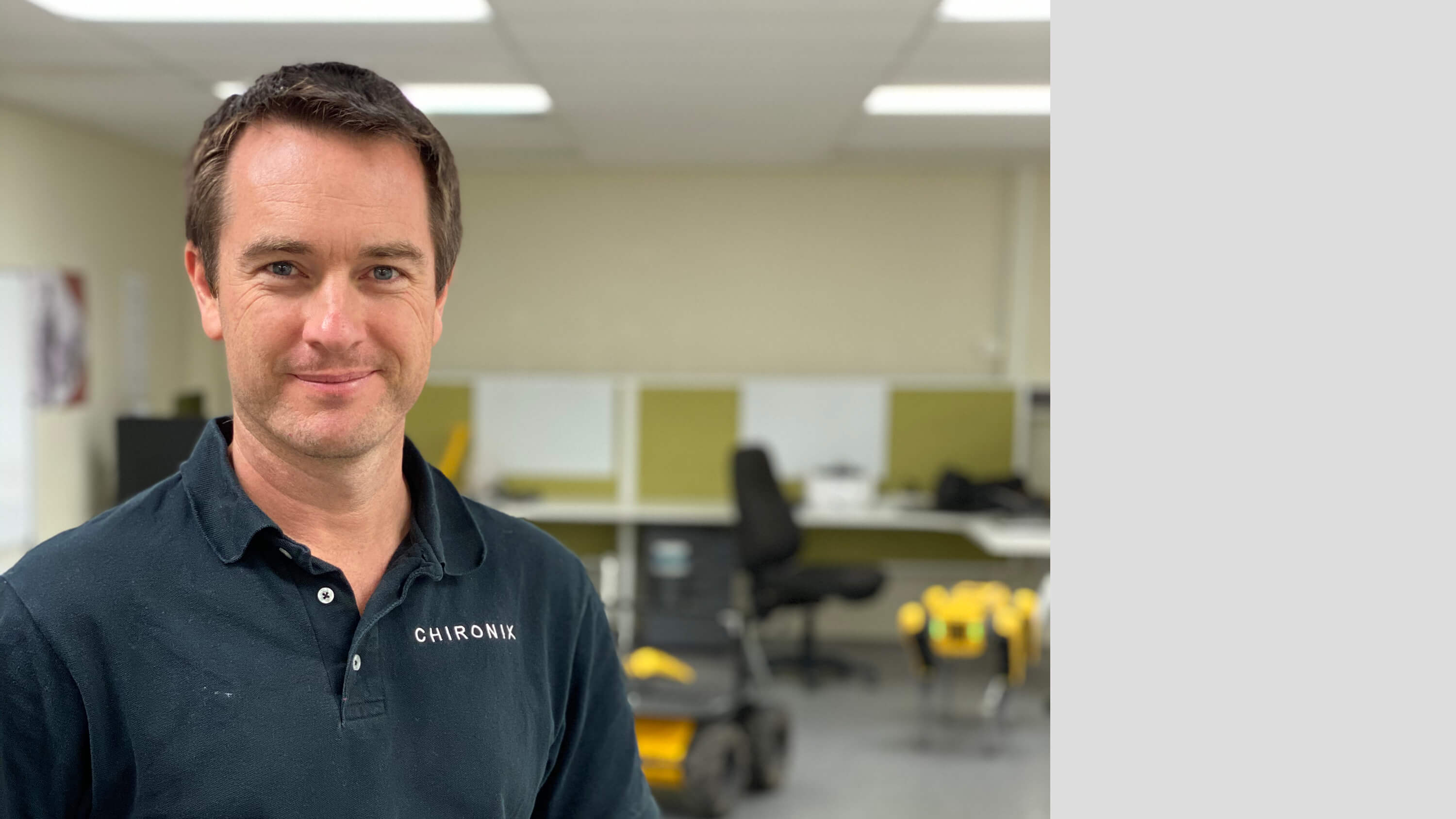 CHIRONIX HONES IN ON US DEFENCE MARKET

There are huge opportunities for Australian companies in the United States defence market, but gaining access can take planning, patience and excellent contacts. One company that’s making headway is Perth-based artificial intelligence and robotics specialist, Chironix. Thanks to a US Landing Pad and Austrade and the Department of Defence support, Chironix’s breakthrough technology is gaining traction with the US Navy.

Chironix was founded in late 2017 by Daniel Milford, a former Department of Defence employee. Having worked as Deputy Director for Technology Solutions in the public service, Milford identified the growing potential for machine-learning and robotics to dramatically reshape the human experience in the workplace. What fascinated Milford most was the human interface: how humans interact with robots effectively while robots start to learn and operate for themselves.

From the start, one of the company’s biggest challenges was how to get the attention of the global defence industry, especially in the US – the world’s biggest defence market. ‘I encountered the Landing Pads program in Singapore where an associate was attending the program,’ says Milford. ‘It got me thinking about a US Landing Pad and its potential for generating contacts in the US defence industry for Chironix.’

In late 2018, Chironix won an initial contract with the United States Navy to help develop a medical evacuation robot for injured servicemen, complete with a heads-up display system for medical professionals to relay casualties’ vital signs in real time to battlefield hospitals. This was a breakthrough contract which demonstrated the business prospects in the US and required capitalisation.

To service the contract and grow the business, Milford wanted to meet the key commercial and military stakeholders in the US – and show them what the technology developed by Chironix could do. ‘By good fortune, Austrade’s Landing Pads program had scheduled a dual civilian–defence Landing Pad in the US from May to August 2019,’ says Milford. ‘We applied, we succeeded, we went – the process was very fast.

’The dual-use Landing Pad program was a joint Austrade, Department of Defence and CSIRO initiative, driven by the Australian Government’s Defence Export Strategy. It leveraged the networks and expertise of all three organisations to deliver a customised offering.

The program was structured to accommodate small companies that may not have the capacity to place one person permanently overseas for the full three-month residency. Milford flew periodically to the US for specific events, while a Chironix marketing consultant was based at a shared office facility in San Francisco for most of the period.

The three-month program was delivered in two phases. The first, based in San Francisco, focused on technology and venture capital; then a move to Washington created opportunities to meet senior figures in US procurement and the defence industry.

‘The Landing Pad was run by a defence-export specialist whose networks and contacts were phenomenal,’ says Milford. ‘We met relevant figures from across the US defence landscape – from industry clusters to the big defence primes and research institutes like the Stanford Research Institute, which helps translate pure research into commercial products.‘By the end of the San Francisco leg of the program, we felt we understood Silicon Valley,’ he adds. ‘In total, Austrade introduced us to 12 consultants during the San Francisco leg of the program, and one of these has helped build Chironix in the US.’

Over in Washington, the Australian Department of Defence and Austrade leveraged their contacts to deliver networking and defence-focused advice on the US market. These contacts proved pivotal. According to Milford, the defence networks established by the Australian Embassy were exceptional, and Milford found himself making personal contact with the officials who would – at some stage – be evaluating his company’s technology.

‘Austrade’s Senior Trade Commissioner and their Defence and Security Director worked with the Australian Embassy to set up meetings with senior officials,’ says Milford. ‘The relationships that the Commonwealth personnel had curated in the US proved very effective. I was able to gain access to industry and government professionals quickly, and the Australian staff were obviously held in high regard by their US colleagues. I was impressed by the professionalism of all involved.’

KNOWING WHEN TO MAKE A US MOVE

The Landing Pads program delivered value in multiple areas. For example, commercial advisory services gave Milford a good grasp of what would be needed to set up a registered commercial entity in the US. Conversely, meetings with multiple figures in the defence industry made it clear that creating a commercial presence in the US was not an immediate prerequisite.

‘Before the Landing Pad, one of my biggest challenges was figuring out if, when and how to invest in setting up a US office,’ says Milford. ‘After the Landing Pad, I knew that for the immediate future, I could grow my US business from Australia. But I also discovered the essential trigger points for setting up a US office and what would be required. Now we know we can expand quickly in the US when the time is right.’Contacts with fellow Landing Pads companies have also proved invaluable. One of the other companies on the program (Tekuma) is developing a one-handed, six-degrees-of-freedom control system for unmanned vehicles.

‘Of the six companies attending, this one has proved a great connection,’ says Milford. ‘It was a great experience because we are all on the same export journey. We shared ideas, thoughts and frustrations, and it was great to be in a cohort where we could learn from each other.’

For Chironix, the other long-term value-add was the ability to establish personal relationships with key figures in the world’s biggest defence contractors.

‘The opportunity to meet these prime contractors was invaluable,’ says Milford. ‘We met face-to-face with the heads of their supply chains at the Australian embassy. These companies could see that we had unique capabilities, and that even though we were a small company, our technology had matured to the point where we could help them create new capabilities to export globally.

‘I made priceless connections through the Landing Pads program and the industry networks established by Austrade’s Washington-based staff. At the end of the three-month residency, I had a solid plan for how to develop the business with the contacts to quickly grow our core business in the US defence market.

’These connections have translated into results, with Chironix signing an initial contract with a major defence prime it met through the Landing Pads program.

Austrade continues to work with Chironix to support their expansion in the US and globally. Austrade is currently supporting the company to pursue defence work in Europe.

Thanks to Austrade for preparing this article.